The following is an entry for Book Riot’s next book, Start Here Vol. 2.

James Baldwin is known for three things; essays on race and sexuality, the short story “Sonny’s Blues” and his second fictional novel, Giovanni’s Room. There is nothing wrong with the aforementioned, but it does not give readers a rounded view of Baldwin’s work. 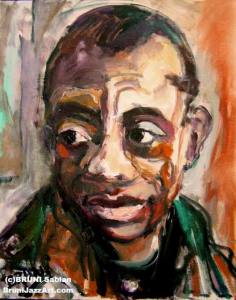 In the same vein of Shakespear’s comedies, histories, tragedies and romances, I like to divide Baldwin into religion, race and sexuality.

Where Giovanni’s Room gets the most publicity, Baldwin’s debut novel, Go Tell It On the Mountain, encompasses every topic Baldwin’s fiction and non-fiction will ever cover. The novel takes place on the fourteenth birthday of the main character, John, who lives in Harlem.

John lives in a rigid religious home — parallel to Baldwin’s — with a deacon father whose relationship to his family is fraught on lies and abuse. What Baldwin does in this novel is pull back the curtain on the laden connection the black community has with Christianity; it is equal parts reliance and crippling. The characters are stifled in their growth and happiness because of their adherence to religion and the one character that rejects it, well, you will just have to read for yourself.

There is a religious strand in every Baldwin novel. Although he considered himself an atheist, his formative years were spent as a child preacher so his works reflect that. Especially during the time when his books where coming out (1950s and 1960s), black readers, no matter what their current religious beliefs were, would have had a comprehensive understanding of his religious allusions, making the characters’ struggles with balancing their religious and sexual choices more real and present than a novel that excluded them.

On a quicker note, his first play, The Amen Corner, reiterates the idea of hypocritical religious leaders and their inability to dole out true forgiveness.

This happens in Just Above My Head, my favorite Baldwin novel. Hall Montana is the grieving brother of famous gospel singer Arthur Montana, who had to keep his sexuality and personal demons secret while propagating the ideal of a black gospel singer

Like all of Baldwin’s novels, the Montana brothers’ childhood was neither perfect nor desirable. While traveling, the brothers and the group Arthur has put together, look at the racism and homophobia of America with the vision of European openness.

A quote from this novel, the only one that has every haunted me, is spoken by Julia, the Montana’s neighbor who, after years of traveling, learns this:

“He told me that I was not barren, that child birth takes many forms, that regret is a kind of abortion, that sorrow is the only key to joy.”

Baldwin became an American expat early on in his life, living mostly in France among the bohemians, so his criticisms of American racism, homophobia and sexism come from his experiences of being open and unashamed of his sexuality and race.

If nothing else, Baldwin does an excellent job in selling the idea of a less racist Europe—though it’s highly debatable if his perceptions were accurate or if he was just so put out with double-minority status that anyplace where differentness was celebrated he would approve.

He would expand is views of sexuality and race in Another Country and the consensus-agreed flop Tell Me How Long the Train’s Been Gone. Both deal with bisexual, interracial, international romances.

For fans of Baldwin’s open homosexuality, their biggest criticisms came about the number of bisexual and interracial pairings. Critics wanted black men loving black men with no white, female characters in the interim.

Rounding out Baldwin’s work is another play, Blues for Mr. Charlie, based on the Emmitt Till murder and If Beale Street Could Talk, a romance and critique on the ramifications of the legal system in the black community.

Many times Baldwin’s work can been see as too Utopian and Euro-centric with heavy-handed analyses on race, religion and sexuality, but for a black, openly gay man in the 1950s and 60s, the only word that comes to mind is brave.

The reliance on Biblical imagery maybe lost on current readers, but deeper questions of how do I navigate my life in a society who many not agree with my lifestyle, and how do I grow as a human in my current surroundings remain.